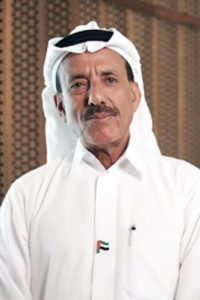 Khalaf Al-Habtoor is the founder and chairman of Al-Habtoor Group, an Emirati holding company for businesses and investmetns in construction, real estate, vehicle sales and rentals, and education.

Khalaf Al-Habtoor sat down for a revealing exclusive interview with Arab News to talk about his company’s plans to join in on the expected upcoming Saudi tourism boom, regional views on concepts such as conservatism and freedom, and the region’s economics.

The full article can be read here at Arab News. Below are some of the most notable quotes from the interview:

On tourism development projects in Saudi Arabia:
We’re seeing now on TV something we’ve never seen before — we see green fields, we see skiing, we see sun and desert. You can’t believe this is the Arabian Peninsula. That makes it very attractive to every tourist or investor because they have variety, because you’re not restricted to one area or sector where you want to build something. You have a choice as to what you can do. In Dubai, we don’t have oil. If we were dependent on oil, we wouldn’t be like this now. Saudi Arabia has a bigger population — 30 million people, 90 percent of them Saudi, who want to enjoy their lives and their history. We in the rest of the Gulf haven’t seen this history, and I personally would like to go and see this history and see Riyadh, the Eastern Province and the Red Sea.

On the meaning of freedom for the Arab world:
Freedom doesn’t mean you should abuse your country, your people, or the authorities. You have to protect your culture by educating other people.

On the future of Saudi Arabia’s alcohol ban:
To be honest, I can’t comment on that because I don’t know what their plan is for that. But everything is changing, everything is possible.

On the regional economic slowdown:
Well, 2018 wasn’t a very good year, and 2019 was also very slow in the beginning, but by the end of the fourth quarter you could see the signs of improvement in the market. You could see it in retail, things were moving. In the land department, people were buying and selling land and real estate.

On the region’s rising prices:
Everything is becoming more expensive. The only cheap thing in the country is hotel rooms — they’re among the cheapest in the world. There are too many hotel rooms and residential developments, and it’s not recommended that we should build more.

On the introduction of VAT:
I think it should be cancelled, and also all the money taken should be refunded. The idea of VAT is wrong in my country for the time being. Maybe in the future. I’d recommended they stop all the fees and VAT and let them take from income, like Britain, for example.

For the complete story with extensive context and sharp analysis, be sure to check out the full article at Arab News.